We cut the cord of the traditional signal amplifiers that require attachment to your house or car, and let you extend signal to more places. We also built our product consistent with industry standards and backed by leading testing and certification agencies. Quality and customer satisfaction are our number one priority. With this in mind, we subjected our product to a variety of tests performed by certified independent parties to meet and exceed Government standards. The mJoose patented antenna system is the first of its kind to be third party tested by CTIA certified laboratories, certified by the FCC in the United States, IC in Canada and IFT in Mexico. Our iPhone 6 and 6S cases are also the only product in this industry that were accredited by the Apple MFi program. With our technology, comes a guarantee of amplified signal strength, improved connection to the internet, increased battery life and charging speed, reduced radiation, and increased device protection against physical damages during falls

SIGNAL STRENGTH: Up to 100x

mJoose technology includes an active antenna system, which can provide up to 100x signal strength. This has been independently tested by SGS, the world’s leading inspection, verification, testing and certification company, that is CITA certified and FCC authorized. Our iPhone 6 and 6S product has also been Apple MFi certified, which means it has passed Apple Over-The-Air (OTA) testing requirement. This test was independently conducted by the Apple authorized lab, UL. UL is a global leader in testing, inspection, certification, auditing, and validation. More than 2 billion products receive the UL certification annually, making it the single and most accredited mark in the United States.

OTA testing was performed to evaluate the TRP and TIS (total radiated power and total isotropic sensitivity) of cell phones in our case, which was conducted in an anechoic chamber as shown in the Figure 2 below. A communications test set (also referred to as a “call box”) was used to emulate the base station (cell tower) and communicate with a cell phone by voice or data. An anechoic chamber is a room designed to completely absorb reflections of either sound or electromagnetic waves. It is also insulated from exterior sources of noise. 2G/3G/4G protocols have to be tested because of their different system parameters (such as transmitter/receiver powers). Figure 1 below shows a diagram of the OTA / Signal strength testing set up. 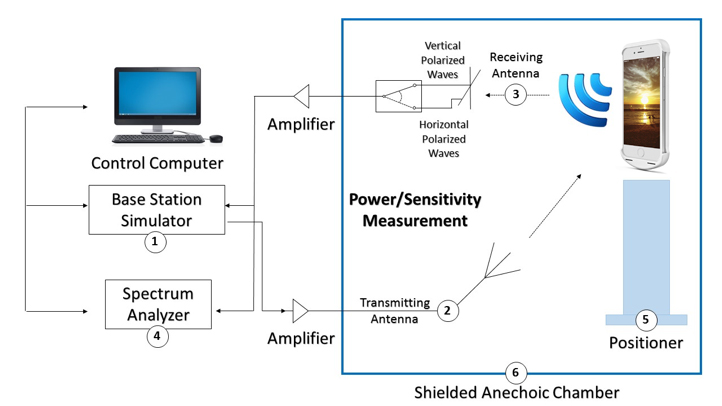 Figure 1. System block diagram of OTA and signal strength testing. (Source: mJoose): the cellular signal is carried to mJoose device from a base station simulator (i.e. cellular tower (1)) through a transmit antenna (2), collected into vertical-polarized and horizontal-polarized radio waves through a receiving antenna (3), amplified and carried to a base station (1) and spectrum analyzer (4). The mJoose device is placed on the positioner (i.e. mannequin hand and body effect (5)) within an anechoic chamber (6) that eliminates outside noise as pictured below in Figure 2.

Throughput rate specifies how many units of information a given system is able to process in a certain amount of time. It measures the speed at which a specific workload can be completed and its response time. This rate was tested by MobileNet Services Inc., an RF engineering service company. Two identical phones (Figure 3) were moved throughout various poor cell service locations with and without our case. As a result, a much better throughput data rate for faster downloading speed was observed while using an mJoose case. Stationary CDF Comparison Charts confirmed the findings of the better RSVP rates (Figure 4).

DOWNLINK THROUGHPUT COMPARISON CHART FOR DATA IN THE SAME LOCATION

Figure 4. Stationary CDF Comparison Charts with and without mJoose case.

The iPhone 6 battery capacity is 1810 mAh. Our mJoose case includes a 2950 mAh battery, therefore extending your phone’s charge capacity by 120% (Figures 6 and 7). This means that our users have over twice as much time to surf, talk and text.

In addition to the extended battery life, our in-house tests showed a 1.5X faster charging speed as our case uses 1.5-1.6 Amp current, while an iPhone charger uses 1 Amp.

In the end you get a technology that can let you be worry-free about running out of battery juice too soon and spend less time waiting for your phone to charge. Many customers can go for up 2 days without re-charging their phones.

RADIATION: Reduced By an Average of 70%

SAR (Specific Absorption Rate) measures the rate of absorption of radio frequency (RF) energy in the human body. The FCC’s current exposure limit is set at 1.6 watts per kilogram (1.6 W/kg) in SAR and a cell phone’s rating cannot exceed this limit in order to receive FCC certification and be sold in the United States (“Specific Absorption Rate (SAR) for Cellular Telephones.” Federal Communications Commission. N.p., 30 Nov. 2015. Web. 06 Dec. 2016.) This testing was performed by the RF Exposure Lab, an organization authorized by the FCC.  In order to find out the absorption rate before and after, the same cell phone was tested by a robotic probe with and without our case, while operating at its highest power level and held in various specific positions against the dummy head and body (Figure 7). The dummy parts were filled with liquid as to simulate the construction of the human body. The findings shown in the Figure 8 below display a dramatic decrease of the RF absorption while using our case. Radiation was reduced by up to 90%; average of 70% 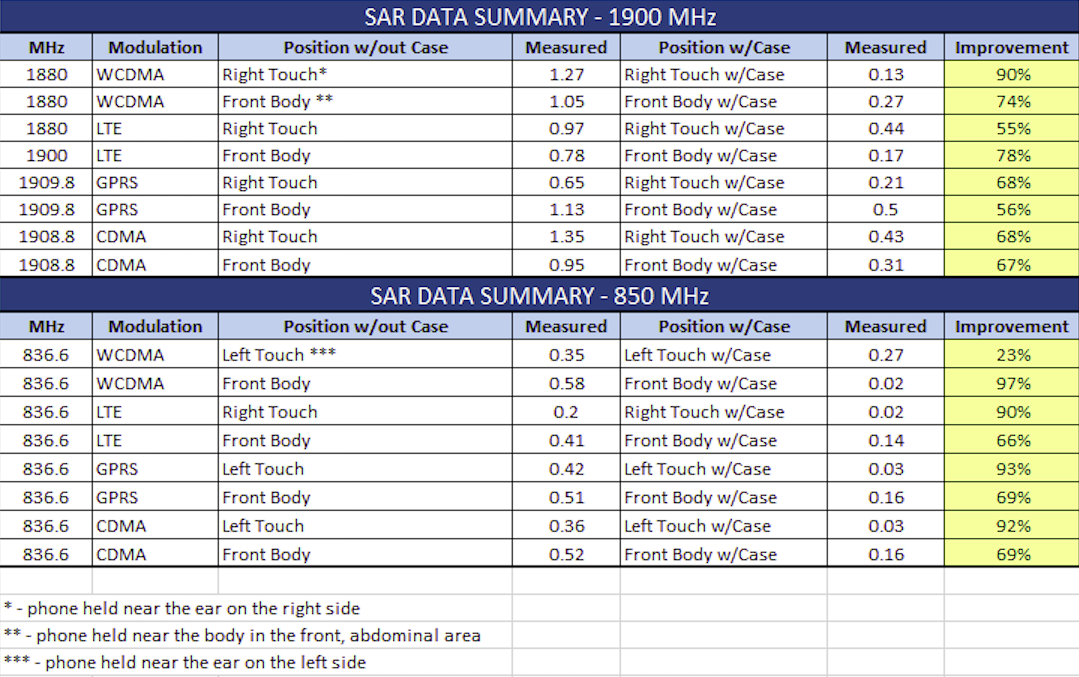 The mJoose case was tested to determine scratch and crack resistant qualities. The added coverage to the back, top, bottom and rounded upper and lower edges increase protection of your phone from being damaged during falls.

(For iPhone 6 and 6S products, other products pending)

mJoose technology has passed three tests required to become certified by the FCC in the  United States and Canada, and one test in Mexico. 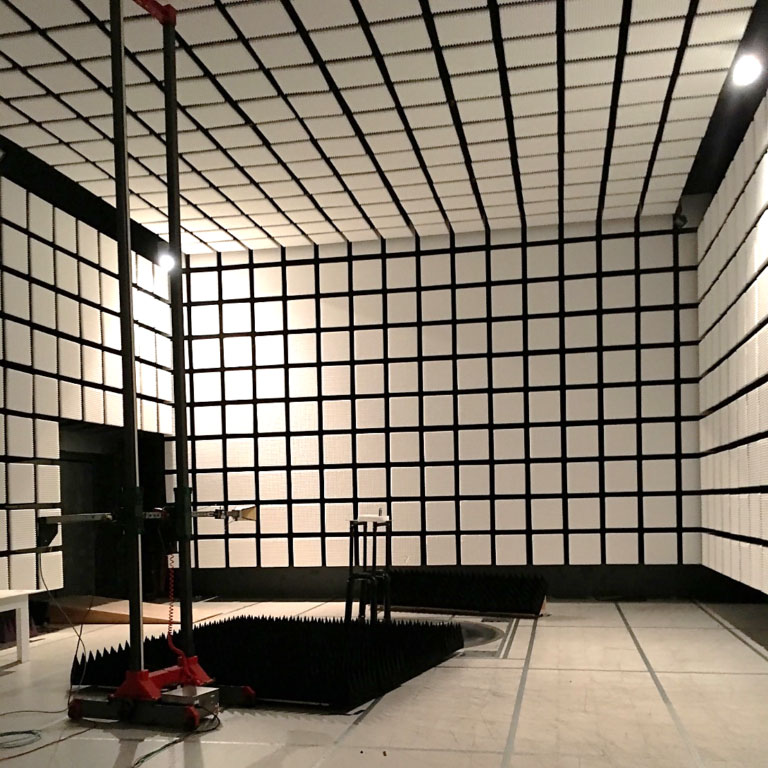 The EMC (Electromagnetic Compatibility) test was performed by NEMKO in order to ensure that our device did not interfere with the other electronics and works as intended in its environment. The details of this testing and findings are described above and referenced in Figure 10.